Yes, There Is A World Cup For Bubble Soccer

Compared to other sports, Bubble Bump or Bubble Soccer is a relatively newly-invented activity. Created by 2 Norwegians, Henrik Elvestad and Johan Golden in 2011 on their TV show, Golden Goal, this unique game of bumping into your enemies grew in popularity and soon spread to other parts of the world. Here in Singapore, due to the fun nature surrounding Bubble Bump or Bubble Soccer, this activity is commonly played during team building events such as corporate bondings and school carnivals, and even private parties. 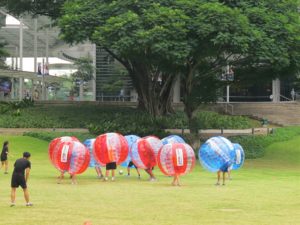 Even though Bubble Bump or Bubble Soccer is widely considered to be one of the most creative games that could be played by both children and adults alike, who would have thought that a World Cup would be specially created in their honour? Yes, I'm not kidding.

In May 2018, the first-ever Bubble Football World Cup was held in London. This event was proposed and hosted by the England-based Events Company, The Stag Company, which aimed to further publicize this sport and attract more talents around the globe. It was a huge success as they managed to invite 16 Bubble Soccer teams from nations including Finland and Spain to participate at a multi-pitch venue in Shoreditch, London. The final tournament was held at the famous Wembley Stadium, which houses the Football Association's ( FA) headquarters and has been the go-to arena for international sporting events such as for the Olympics and NFL. 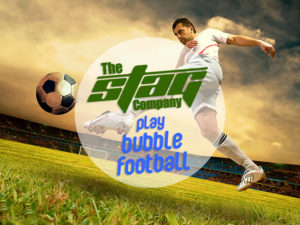 The growth in demand and recognition for Bubble Bump or Bubble Soccer have led to a significant number of organizations to be formed. In the United States, Bubbleball as it's called in the country, was initiated by Mahdad Taheri, who was inspired by this European sport after seeing a clip of the game being played. He then launched bubbleball.us in April 2014, advertising the event by associating to the FIFA World Cup of that year. As of 2018, companies and organizations such as BubbleBall MD, Battle Balls and the National Bubble Soccer Association are part of the competitive market to distribute and host Bubble Bump or Bubble Soccer events in the country. In fact, the United States is the largest Bubble Football or Bubble Soccer proponent in the world, with the National Bubble Soccer Association possessing 39 leagues, each with 8 to 10 teams. Talk about having that many participants!

As such, Bubble Bump or Bubble Soccer would prove to the ultimate activity to spend time on. Regardless if you're looking for events for team building days or even simply fun things to do in Singapore during the weekends, why not look towards this sport? I am positive that you and your teammates would have a blasting good time bumping into each other!

The Fun Empire is the leading birthday celebration and birthday party provider in Singapore and Asia. We offer over 40+ unique team building games and team bonding activities.

READY FOR THESE ACTIVITIES?